My Vegas Tell All; A Three Week Re-Boot 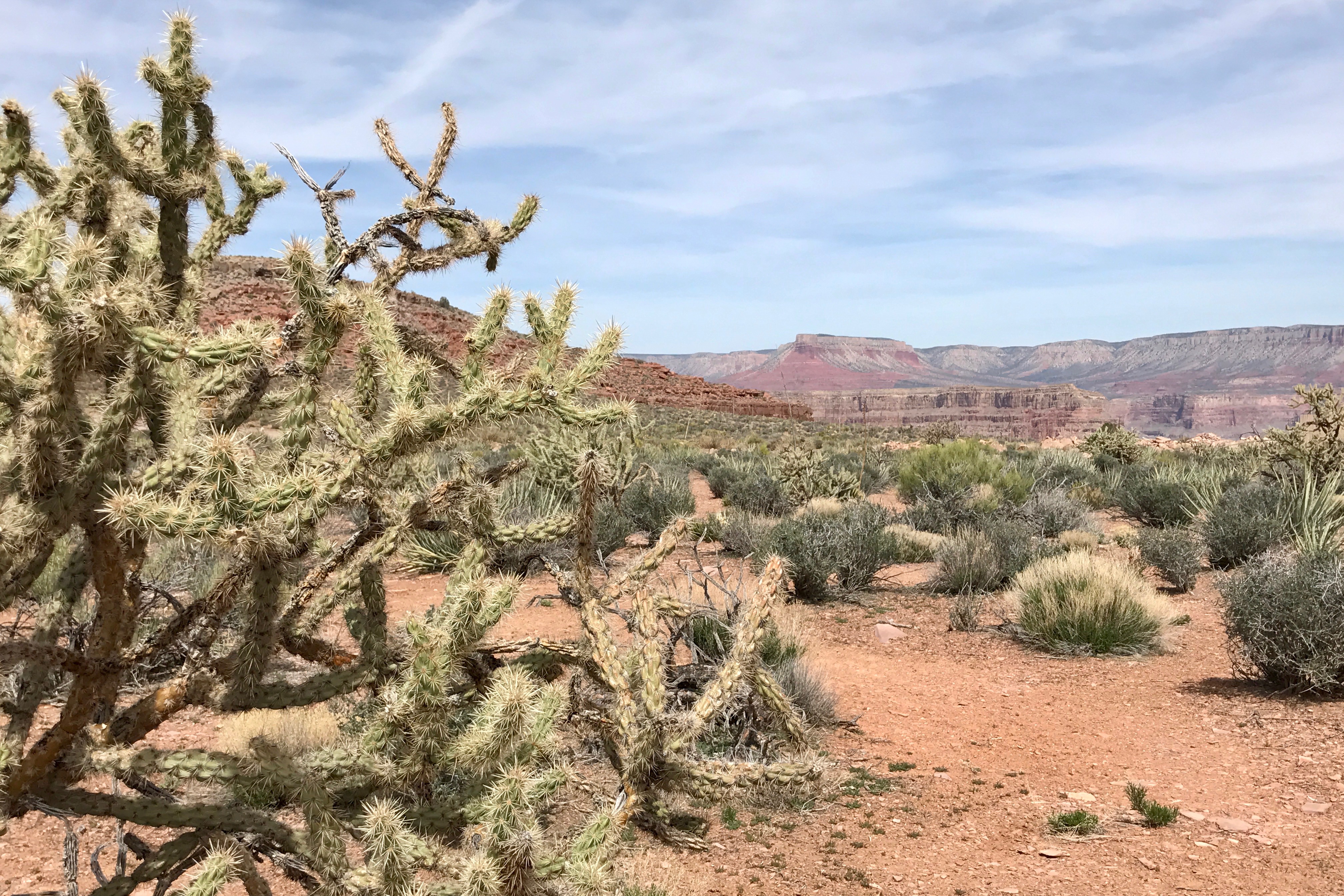 Actually, we left Las Vegas and I’m here to tell all. It was a nice change of pace for us, a re-set for body and mind. For three weeks we were able to focus on nutrition, fitness, and business. Rob and I thoroughly enjoyed the time we spent with my sister and her two dogs, Zoe and Zeus. It certainly didn’t hurt that for a good two plus weeks the skies were blue and the temperatures ranged between 85-93 degrees.

Even though I was ready to ditch the suitcases and get settled into our new home in Bend, I was sad when it came time to pack, load the car, and say goodbye to Chris. 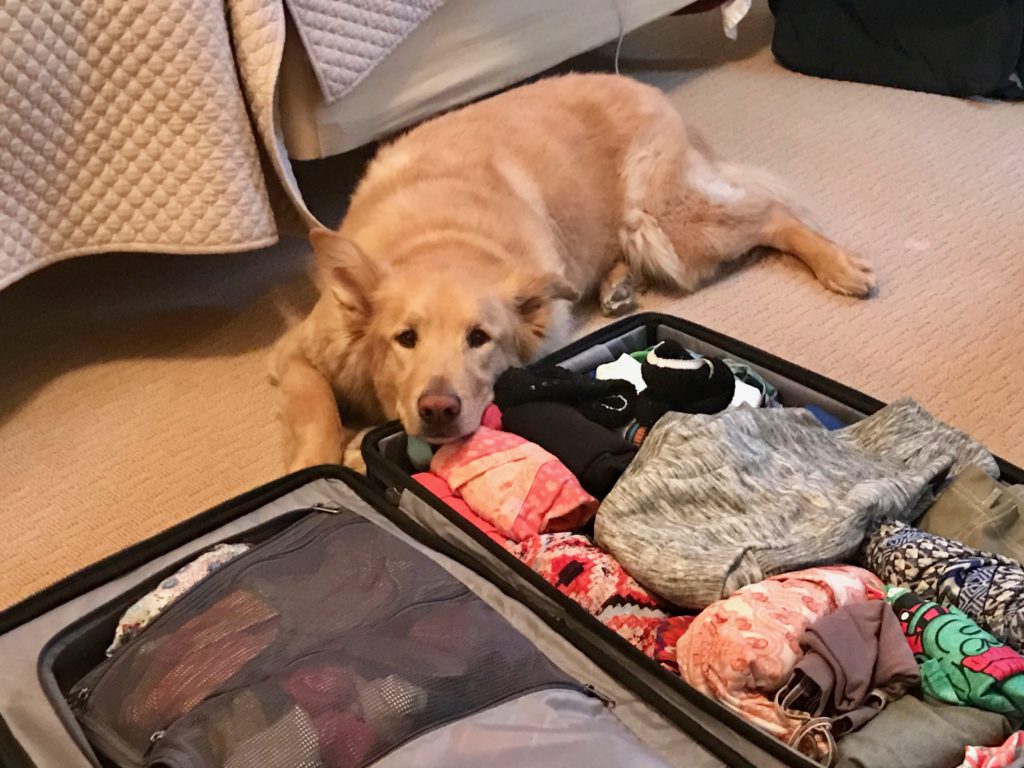 As you know, I’m working towards becoming a health coach.  I offered to help my sister on a “reboot.”  She wanted to become healthier, and I wanted to help someone become healthier. And on a side note, our condo in Bend would not be available until the first of April. So, off to Vegas we went.

I arrived in Vegas, or more accurately Henderson, with one simple question. Would a plant based, “real” food nutrition program help someone feel better, have more energy, and lose weight? 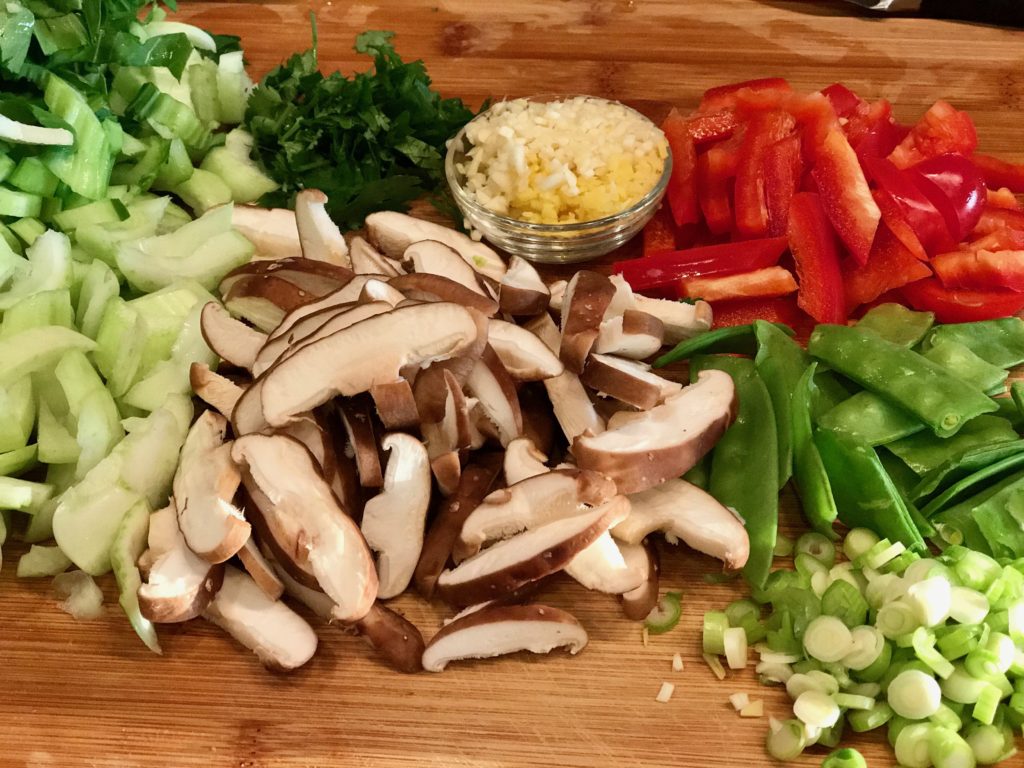 My primary goal was to guide my sister on a path to better nutrition and to help her feel better by preparing three real food meals every day. When I say “real food” I am talking about foods that are in their most natural state possible without added sugar, preservatives, or artificial ingredients and with the least amount of human intervention. At the end of three weeks I hoped that Chris would notice a big enough difference in how she felt that she would be motivated to continue eating real foods.

In addition, the stresses of moving had thrown us off course. We were eating out more frequently, consuming fewer fresh veggies, unwinding at the end of the day with a glass of wine or a pint of beer, and my coffee consumption had doubled. Rob wanted to shed a few pounds and I secretly thought I could get him to change a few of his eating habits. I knew we needed a course correction. 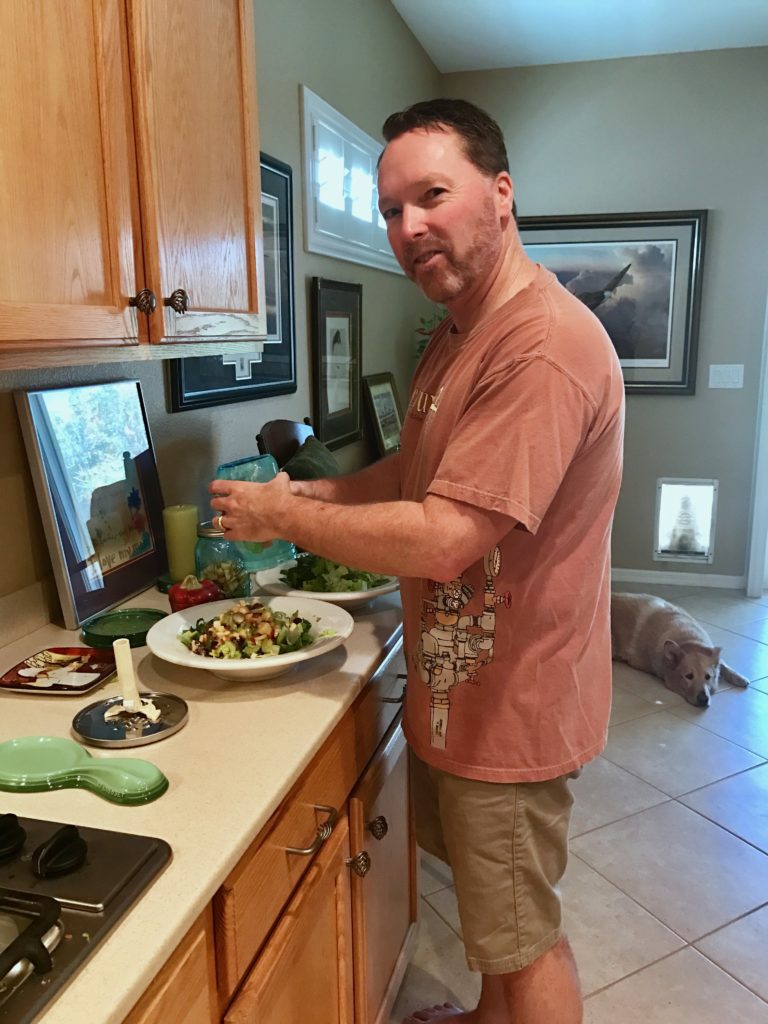 I wasn’t sure we would be able to stay after our first night there. Zeus, a seven year old lab-shepherd mix, was overly rambunctious in his welcome. He was so excited to meet Penny, our small Silky Terrier, that he wouldn’t leave her alone. She was not amused and told him off quite firmly. He cried and scratched at the locked door for hours that first night. In the morning he was pouncing on Penny and chasing her all around. She lashed out and caught Zeus’s ear in her teeth. Even with blood dripping from his ear he was not deterred. As Chris left for work she said, “Please don’t drive back to Oregon today while I’m at work.” I took Penny and Zeus for a walk. With both of them on leashes and the distraction of smelling they pretty much ignored each other for the hour. When we got back to the house they were fine and soon settled on a way to coexist. It’s a good thing they did, because I did not want to leave. 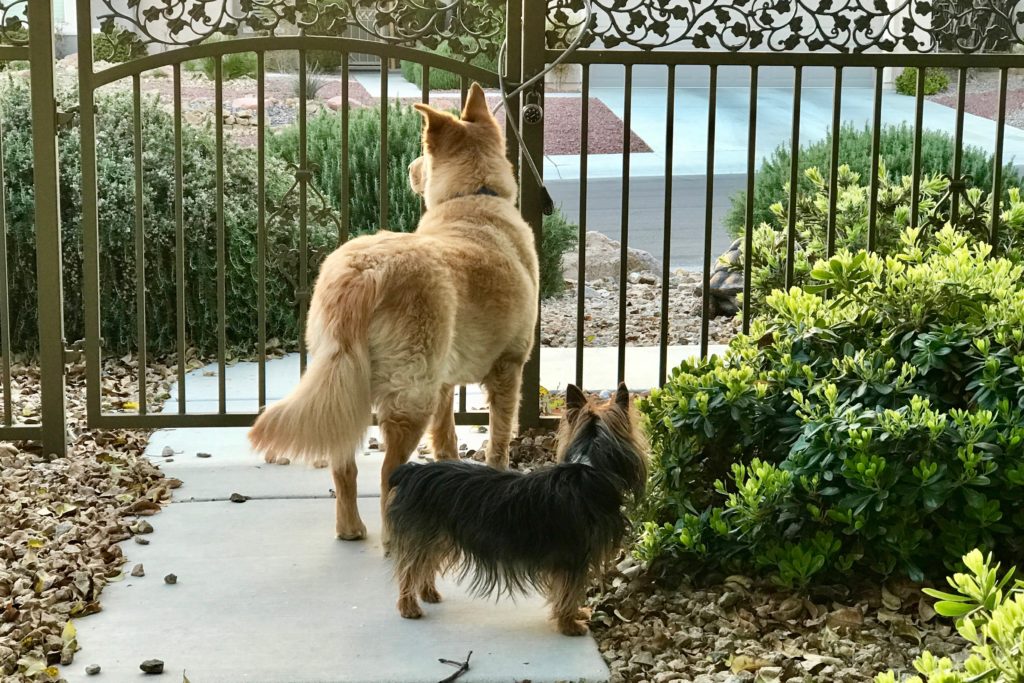 My basic plan was to hydrate first thing in the morning, prepare three meals a day, include healthy snacks, and educate and motivate with video documentaries each night after dinner. I used the recipes that came with the 21-Day Food Matters Program found on the membership site FMTV. A membership also gives you access to a plethora of documentaries, recipes, yoga videos, and extended interviews. There is a wealth of information available for $9.95 a month. I felt that the motivation and education was worth it. It’s like Netflix for health-related documentaries that cover topics like:

We started each morning with 12 ounces of lemon water. Our bodies need hydration after sleeping and before consuming anything else. Since lemons were also an ingredient in some of the recipes we probably used 60 lemons in three weeks. I wished that I had a lemon tree like my nephew has in California. Although it is recommended to abstain from coffee while on the 21-day program, I didn’t think we had to go through caffeine withdrawals to achieve the goals I wanted. 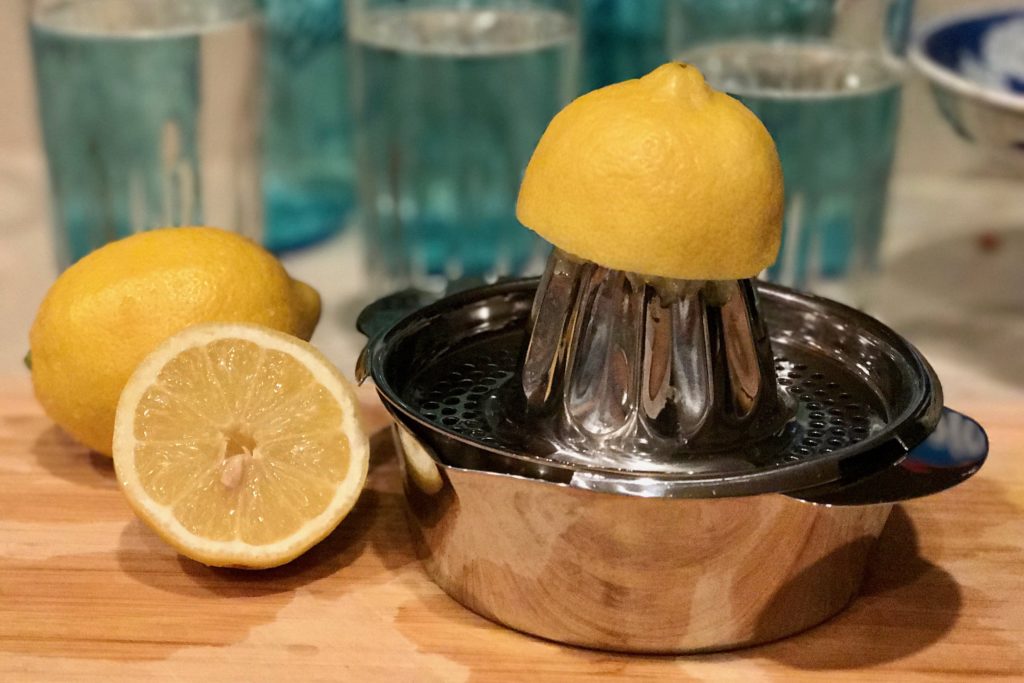 I brought my Vitamix with me and used it five mornings a week to make green smoothies for our breakfasts. There was a smoothie recipe in the 21 Day Program and I got inspiration from Simple Green Smoothies, but most mornings the smoothie was my own concoction. My basic formula is 2 cups liquid, 2 large handfuls of greens, a scoop of plant based protein, a greens powder that includes spirulina and chlorella, a healthy fat like coconut oil, 1-2 cups of frozen fruit. This is Chris’s favorite smoothie.

Blend until smooth and then add 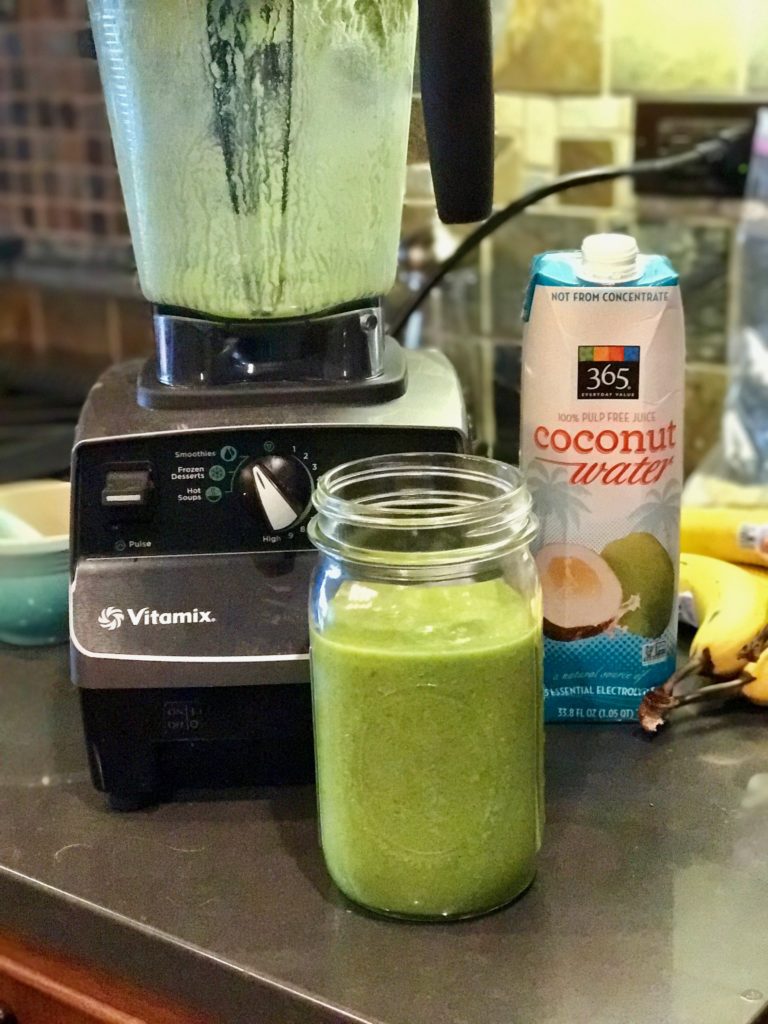 To make menu planning easy I used the Food Matters 21 Day Program for our lunch, dinner and weekend breakfast recipes. I used my menu planning sheets to map out our weekly meals and create a grocery list. After my first trip to Whole Foods I learned that I would need to shop twice a week. There wasn’t any way to fit all of the produce for an entire week into Chris’s fridge. I found that using two different colors of ink helped me know what to buy for the first half of the week and what to buy mid week. 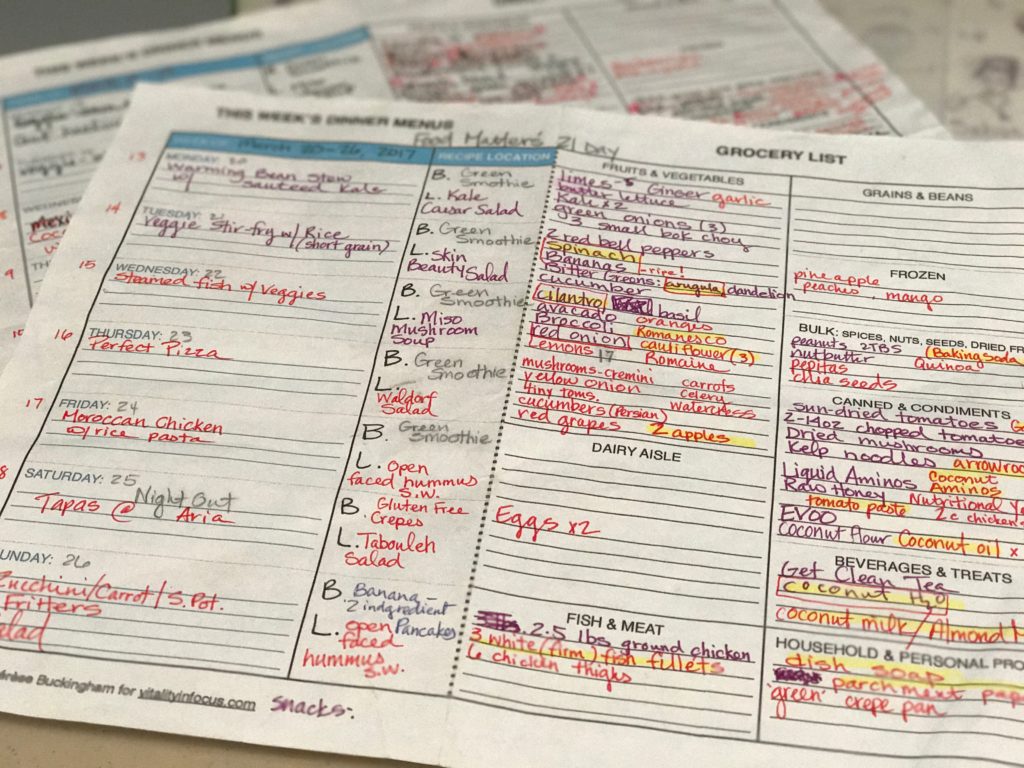 I packed a lunch for Chris to take to work with her each day. Mason jars made an easy to-go container for salads. The dinner recipes were easy to make and, with the exception of the chicken soup, took less than 30-45 minutes. We had our favorites, but everything was tasty. We enjoyed a large variety of fresh, colorful vegetables. The salad dressings, hummus and gluten-free bread were all made from scratch. We incorporated nuts, seeds, quinoa, beans and brown rice into our meals to complement the vegetables. 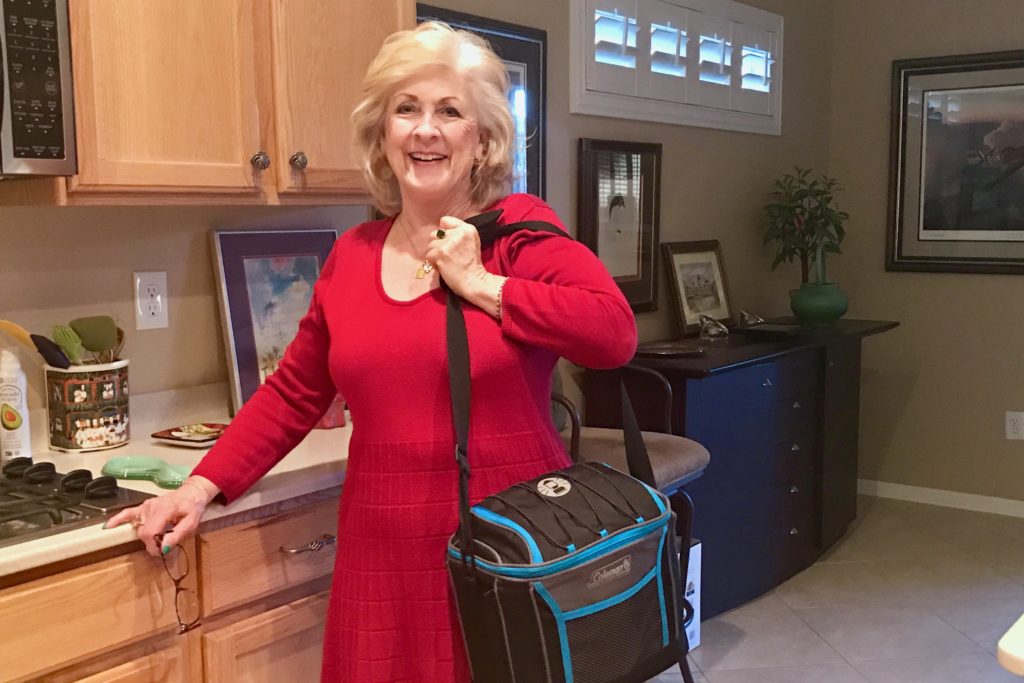 Off to work with her lunch bag.

Before I arrived this was Chris’s typical meal plan:

Snack – can of onion soup

Snack – nuts or hummus with crackers

The Standard American Diet (SAD) is based on speed and convenience. It is made up of foods that come from a drive up window or are packaged up in factories with a host of chemical additives. Big food companies use chemists to create the perfect combination of sugar, fat and salt to get consumers hooked on their products. Meals are void of bright and varied colors with little that comes in it’s natural state. White flour, white rice, white potatoes, white sugar and salt are staples. It is also often lacking in variety. People will eat the same ingredients or foods day in and day out which leads to some nutritional deficiencies. What would happen if we avoided the SAD and ate more real food?

At the end of three weeks the results were in. Rob and Chris completed before and after surveys that showed a positive change in their perceived wellness. Chris found that she felt better, and she lost 8 pounds. She reported that she felt healthier, happier and wasn’t struggling with hunger. One of the things we learned in the documentaries is that you can eat and eat and eat, but if you aren’t feeding your body the nutrients and minerals it needs you will still be hungry. She said that with an increase in energy she was starting to think of things she wants to do instead of thinking, “what can I put off.” What did she learn? “Eat better to feel better, to live longer, and to live healthier.”

Rob had more energy and lost 9 pounds. He’ll tell you that he didn’t go hungry or have cravings that couldn’t be cured with a healthy snack. His biggest aha was learning that more exercise was not the answer to weight loss. When he gave his body better fuel he was running faster than he has in years and his recovery time was significantly shorter. 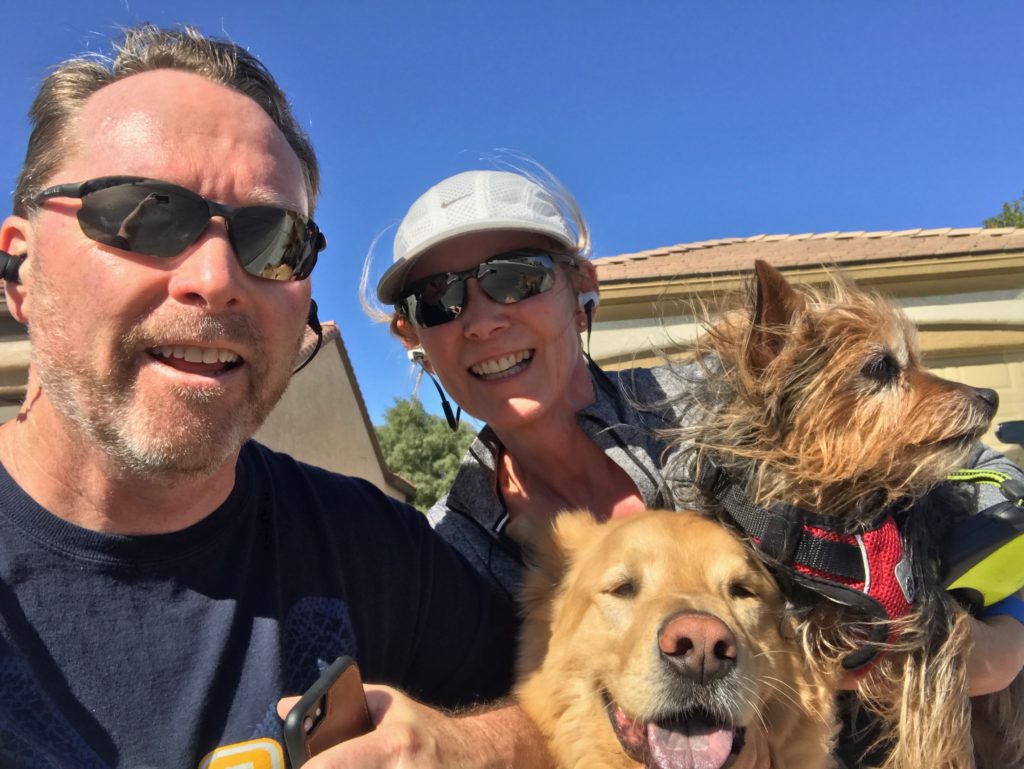 What Happens in Vegas Doesn’t Stay in Vegas

In the end it was an awesome three week re-set. Rob and I joined a nice yoga studio called Hibs Yoga in Henderson. We succeeded in going two times a week. Thank you Roxanne, Joey and Rachel for the great training! We found a bike trail to run on and a killer hill route. We even ran in a 5K race out near Hoover Dam where we finished 5th and 7th in our age groups. Rob could have done better than his 7th place finish if he had cut loose from me, but he says he was there to run with me not break any records. You’ve got to love a husband whose running goal is to run with his wife. 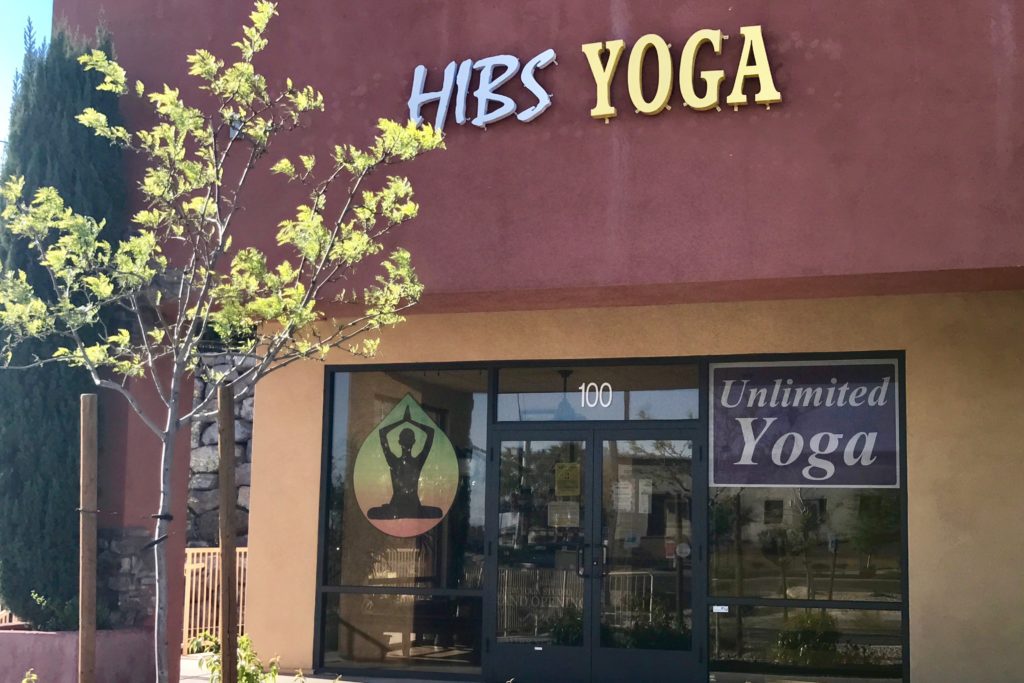 Two Saturday day trips took us into the Red Rock Canyon and Grand Canyon West. Both were beautiful areas to hike and take pictures. I made multiple trips to Whole Foods and Trader Joe’s for groceries. Chris was amazed at how I filled her refrigerator with fresh produce. Thankfully there was time left in our days to get some work done as well.

The three weeks in Vegas slipped by quickly, but the balance we felt is something we want to hang onto. We want to take this with us and not leave it behind in Vegas. 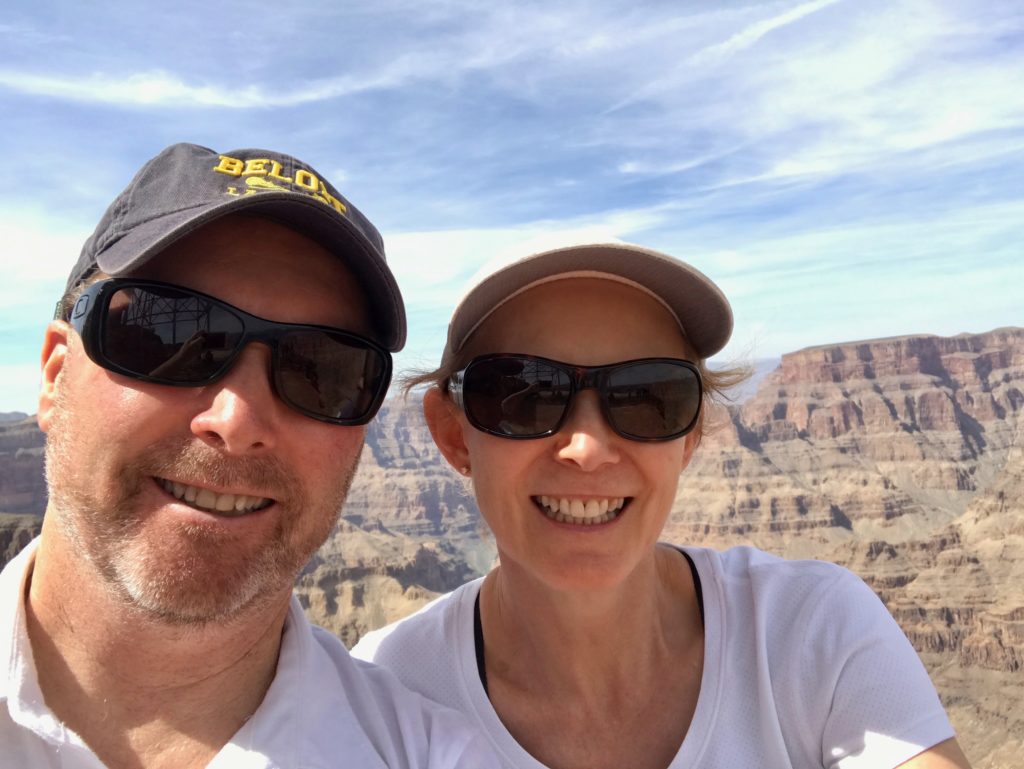 As I continue to coach Chris remotely and continue to experiment with new recipes and menus I am starting a list of potentially interested friends for a small beta (trial)? group that I can coach through a similar 21 day healthy eating experience. Leave your name below in the comments or send me an email if this intrigues you.